“You shouldn’t go, you would find it boring.” my boss told me, “By right, you know more than them, so why go?” I still went, a controversial aftertaste.

Google Maps, get in the car, get to the spot. It took me half an hour despite of not having any traffic on the road to get to the Word Camp Malaysia 2017. 7.50 a.m. Reached. Took the lift. Checked in. The guy at the counter, cheery, welcoming, lean, pallid with power, had a ground in the middle of the sea (if you are Chinese, you might get this) spelled my name wrongly for the first time, but still he had a fraternising demeanor.

Registered, T-shirts and swags were taken by me. The social awkwardness gripped me hard, it had been too long since I was thrown into a pool of strangers, I kind of lost my touch with my socialising skills, too rusty. I grabbed unto 7 pieces of cheese sandwiches, sauntering and listening around, not interacting, yet.

As I flipped my card to look at the schedule, there were on time. By 0900 sharp (some marginal errors by 1 or 2 minutes), the event kickstarted. Opening speech, formalities, had to be done. The event was organised fully by volunteers, so I expected some flaws to be here and there. I sat next to Janice, a gregarious lady, ebony, chatted with me for a while, quite a nice person, she was hesitating on offering me a job that I heard from her tone just because I am only a student.

Regarding to the first talk, quality wise, I would give it a ‘meh’ because I was listening to his talk on behalf of my friend. He was talking about photography, cinematography. Although some of the info that he provided was useful, but his starting of and the content of his speech could be slightly improved to attract the audience. I had to pay more attention to listen to him. I talked to him after his talk, and.

Proceeding to the second talk first, from a blogger, as huge as me, but she had the opportunity to speak at Ted-X, a little green-eyed monster from me. Her writings were ‘meh’ or I should say ordinary, she had her quirks in her writings, totally respect, but to my taste, it was just borderline average. I was reckoning that if I were to put in more hard work, maybe Ted-X people would notice me too. Her speech was more to beginner bloggers because she was like a intermediate blogger talking to a huge crowd of people who were and were not bloggers. She did not touch on how to reach a wider audience with blogging, or building a community around your blog, or commenting on people’s blog, or interacting with other bloggers.

However, during the Q and A sessions of both talks, they shed some light to my begotten past, a quality that I honed when I first started blogging, originality and consistency. When I was listening to their response from my question:

“Hi…” shaking off some anxiety in my tone, “I’m a blogger, and I usually collaborate with my friend who is good at photography…, he posted his pictures on instagram, and he would send me his thoughts on his photos, so… I could write them down on my blog and share it with my audience. How to actually reach a… broader audience… like those instagrammers or influencers?” a little stutter here and there from me.

“Um… Ok. There is no definitive way to grow your blog.” there was a lady handing me a piece of paper, a blogazine name card on a flimsy piece of paper well played. I thought, darted a masked smile to her as a response, “But… keep your work original, if you really are original, then people would come across your blog, notice you.” That was the gist of his answer, shortened in my words that struck me indirectly, letting me flashback unto my works, some were forced, below satisfactory, sometimes, it was not me who was writing, figuratively.

As the pang subsided, the mike was passed to a Malay lady, who did not have the features of a Malay, sort of a mix of Malay and some other races, fair skin, with a tudung, of course. “It is true to keep hold the originality in you.” she added, another huge chunk of her talk slipped my mind.

“You are on the right track, just keep doing what you are doing.” a pat of affirmation was sent to my back.

“Hi…” the same opening, the same stuttering, “In your six… seven years of blogging…, how do you get here…? What kind of opportunities that you seized that made you stand here today…?” the stuttering was unbearable.

“Consistency. You need to blog daily, not like ‘I don’t blog on weekdays, but post 10 posts on the weekends’. No. This is not how blogging is done.” the rest of her answer was a repetition and an emphasization of consistency. Her talk was definitely suitable for beginner bloggers or pre-intermediate bloggers, not for me. But her advice was.

Originality and consistency. The ingredients of an incomplete recipe, me.

‘Cloud’ was the next topic, I did not go to the other talk because I had nothing to do with business. Sorry to say that I learned the least from your talk. Perhaps you could call me unattentive, but due to your half-done technical presentation at the end, and plus I am not a tech savvy, so…

The next speech was phenomenal, one of my favourites, it was from Mike, about building a community round your blog. His talk inspired me to do something to my blog, a catalyst for my blog. (It is going to be implemented in my blog soon!) Gathering a community, giving the people a chance to share their thoughts, generously handing out rewards in terms of virtual batches on their profiles, “People live for rewards and achievements.” Those words blurted out from him were a perfect fit to visualise the mindset of peoples now. He also mentioned about competitions. It was a great talk.

Lunch served after the barrage of talks, I managed to talk with some peoples, getting to know what direction people were heading these days. Buffet lunch. Food, bon appetite, the flow of food, seamless. Very nice.

‘Gutenberg’ was next, a sleeker web editing system from wordpress that would be released with WordPress 5.0. The speaker emphasized that this might create a storm of controversy between the good and the uselessness of this creation, like ‘Gutenberg’. But, in my opinion, I am okay with the wordpress now, if this ‘Gutenberg’ is going to enhance my wordpress experience, then good for me.

‘Pop’, was the next speech, he spoke tonnes of tech ‘jargon’ (for me, a not-techy person, his talk was a dread, I could not understand his concept) but until the end, I could somehow summarise what he said, it was a website that could be loaded offline, with a more efficacious coding, back-end, front-end systems. For the tech savvys, it would be a above average talk for them, but for me, ‘meh’ and some headaches.

Cheery was next, perhaps another of my favourite speakers, not because she looked absolutely stunning, imagining that having a beautiful lady working at Google, it had re-sparked the fire inside me. Her looks aside, she does really know her job at Google, she works at the search department of Google, she shared literally everything, and avoided some sensitive questions during the Q and A sessions, citing that ‘I don’t want to be fired.’ It was the only speaker that made me take down some notes. Her insights about Google search engine really benefited almost all of us. 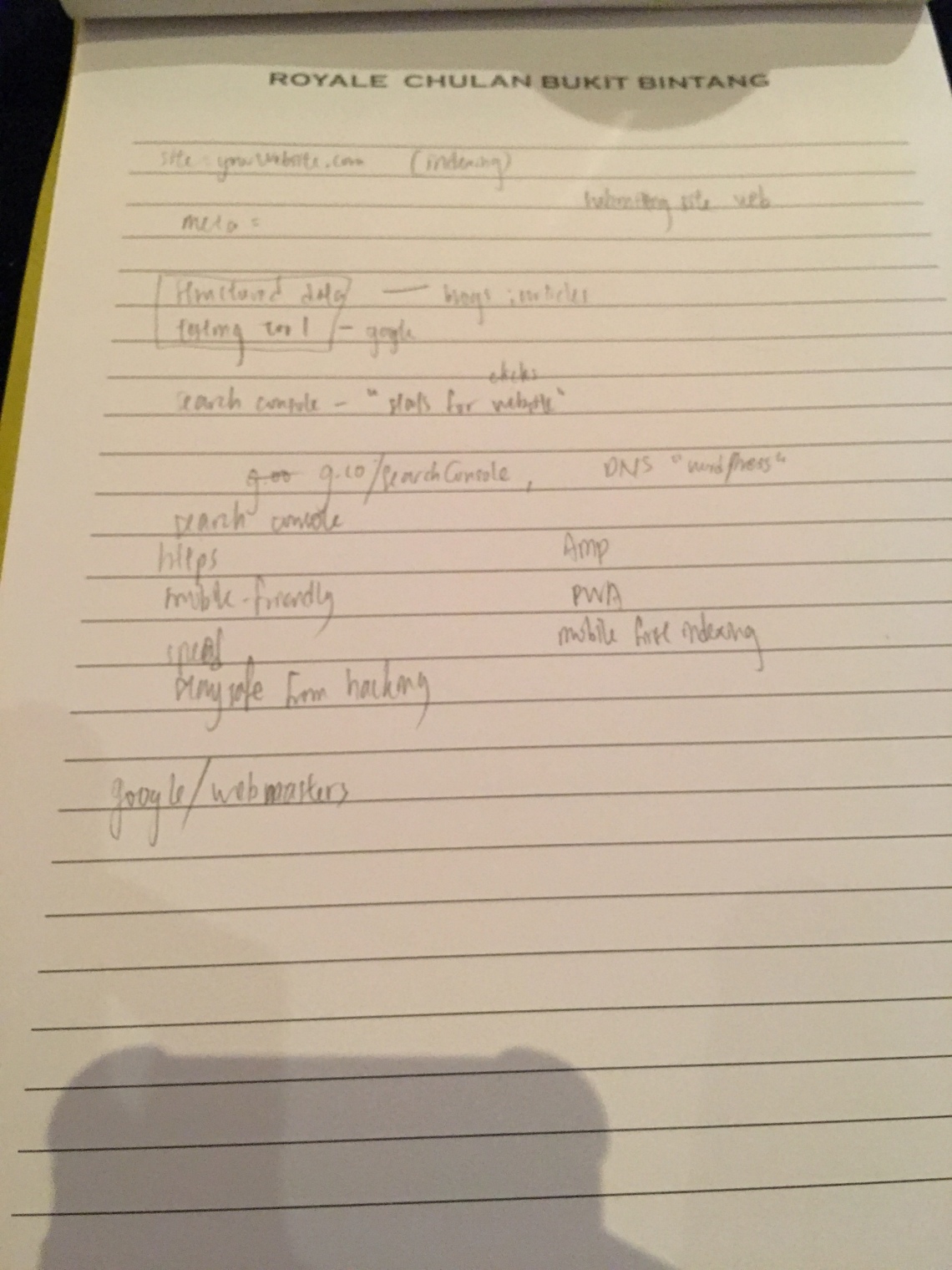 These are the notes. This post went too long.

Cutting short. The last speech was great, but I had the knowledge of the presence and the incoming of VR and AR interactions, so it was just a reaffirmation of my point of view of the future. But, his presentation was done well, plaudits from me.

Alas, coming to a closing. I did not get the lucky draw. What a misfortune. I was looking out for Cheery from Google. I got to her, asked her the most stupid and practical question.

Wait, wait, wait. So many people were surrounding her. “Hi, Cheery.” My heart was running laps against my rib cage. “Is it possible for me to join Google in a few years time since I am now still a student.” it was nerve-wrecking asking this question.

“Do I need to learn any coding language since I intend to enter the actuary, Maths, or statistical department?”

“No need, only some particular departments like engineering,” she adjusted her thick black specs against her fair skin and her silky hair, covering up her fairly thick eyebrows, protruding some beauty from Thai blood, “for the departments that you have mentioned, no need to learn any.”

I had to go. I extended a handshake to her. She was charming. I had to admit that I had a little on her by her speech that showcased her dedication in work, and she works for Google, more like a mentor-crush. She wished me good luck for attempting, quoting that age is not a problem.

Some goods and some bads, the events are very smoothly carried out, very professionally managed in my opinion, but the problems laid on the speakers, that’s all.

Would I attend word camp again?

Yes and no. Depends on my schedule. I would not be like this time, die die also must go.

Craving for more? Down below:
STPM VS. COLLEGE (For SPM students) (Malaysia)
Frozen Frame
Prey-ed
Vincit Qui Patitur
Knife Vs. Revolver
Above, Solo.
Being Inauthentic
Clouds