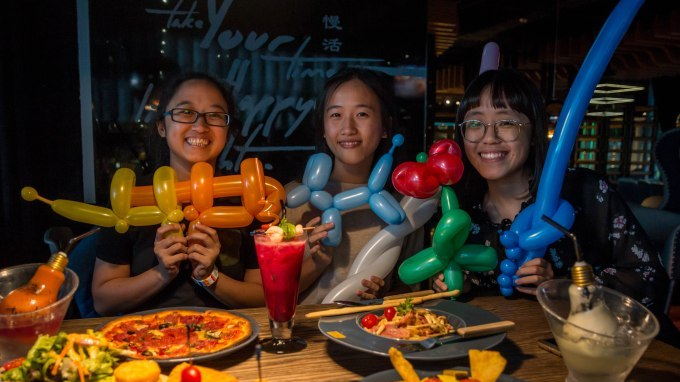 “Kye, wanna go to do something fun?” Deb said in her cheeky voice as I was driving us back home, I did not reply, “… something different?”

I was wearied from my intern during the day, I was just craving for my bed, “What…?” I responded in a monotone.

“Let’s go meet a friend of mine,” I shifted my gaze to her, “for balloon twisting.”

Interesting… My mind wanted to learn something new, “Sure.” I satisfied it.

As we arrived to her friend’s house, it was just an ordinary terrace house- generic and normal, nothing extra. We got down from the car and received a warm welcome from Elroy- slightly shorter than me with a typical Malaysian tang to his smile. I was shaking a little, maybe it was from the tiredness, or it was just excitement.

Wow… We were not only welcomed by a warm persona but also by the spectrum of a rainbow- vibrant, cheery and hearty. The vicinity was furbished with the peculiar twisted arts and painted with hues of inflated balloons. The ‘working’ table with a few pumping device/ tanks beside it was seated in the brilliance.

“This is Elroy.” Deb introduced me to him, we had a small talk before we got into the main course of this visit- balloon twisting.

Elroy gave us a crash course on balloon twisting. It was fun, and not difficult, at all.

When I see Elroy demonstrate for us, in a piecemeal approach, I got some jitters. Previously, I had this presumption and the fear of the balloon popping under the sheer force applied by the balloon twister.

“Don’t shy shy lah, the balloon won’t pop so easily one.” Elroy gave us an affirmative nod by proceeding in twisting our balloons. Squeak. squeak. squeak. His hands moved majestically through and forth the balloon. “… and… here… Wa lah!” he held up a poodle in front of us. “Try lah, it is easy. ”

Truly, his words did not lie, it was a cinch. I was not even scared of balloons anymore. In two hours time, we learned about five balloon twisting techniques, and we were already better than half of the street clowns.

We thanked him after that and we decided that the real way to get happiness is by giving it to others. The next day, we stood by the park after our work-out session to give out balloons to the children in the park.

Exchanging smiles with free balloons was worth the experience. Seeing the children frolicking around with our piece of art was more of a pleasure. It was one of the simplest form of happiness that can be witnessed after giving out the balloons, both parties were smiling brightly at the same time.

It is always the little things in life that portrays the intrinsic meaning of life through the minutiae.

Craving for more? Down below:
Where Do I Get My Pictures?
Riding Tides
You Are Not The Only One
May Be (Goals For May)
Get Some Rest. You Deserve It.
You. Yes, You.
Accustomed