Taking a break from the hectic lifestyle that I am leading, I needed to catch a breath for my well-being, or else I think I would go mad. My friends had planned before-hand to go to Port Dickson. 10 of us, just about to hit our 20s, could not afford the luxurious Lexis or other hotels, we stayed in an Airbnb homestay.

Just for 2 days 1 night, Bacon found the most suitable place for 10 of us, I would totally recommend this place to anyone who is planning for this kind of trip. Link is here: https://www.airbnb.com/rooms/10790495

Apart from the beyond-satisfactory accommodations, we had a blast in Port Dickson (PD).

I volunteered myself as a driver, as well as Yu, we drove and sang throughout the journey to the designated spot. It was an approximately 2-hour drive from Kepong, and luckily there were my friends keeping me company to prevent me from dosing off.

As we reached Seremban, we headed to eat ‘Mian Bao Ji’ (Bread Chicken)- https://www.facebook.com/LUCKYKINGBUN/, a must-eat when you reached Seremban, no need for me to explain how good the food is, 10 of us were very satisfied with the food there, especially the curry dipping.

After so, we checked in at the homestay as mentioned above, took a rest before getting ingredients for our BBQ session at night. We chatted as we went around getting all the stuffs needed for BBQ.

One thing about Port Dickson is that it is very short of good restaurants, perhaps that is one of the shortcomings of Port Dickson.

A trip without a run will not account as a trip for me. I went for a run in the evening, my friends had no intention of running with me, so I ran by myself.

Let me run you through the scenes of my run: 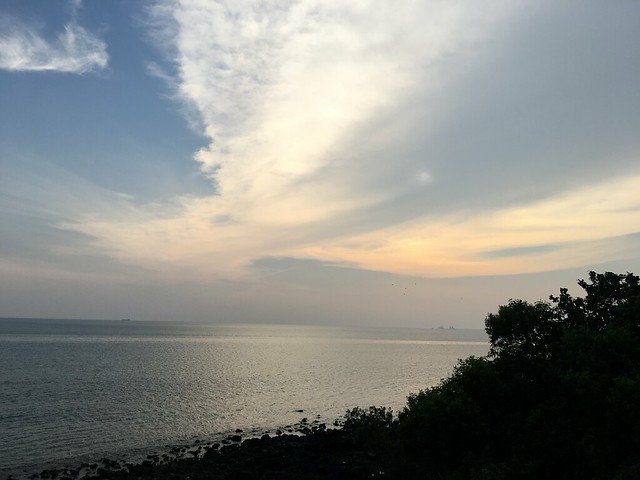 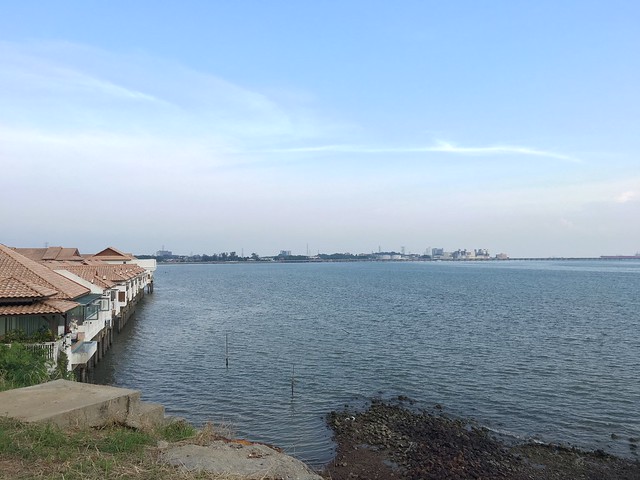 These were pictures taken from a tiny beach that is meant for people to ‘steal love’. Haha. If you do not get the way I gave the beach its name, try translating it into Chinese. 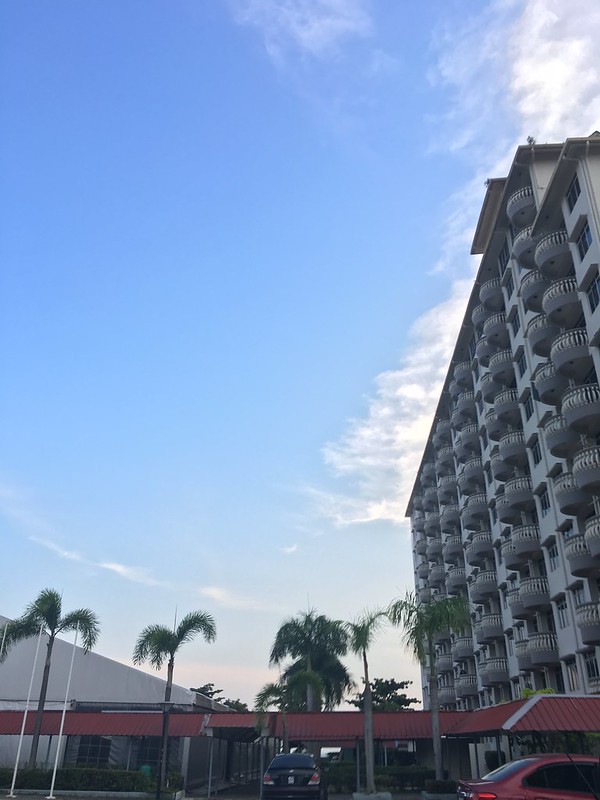 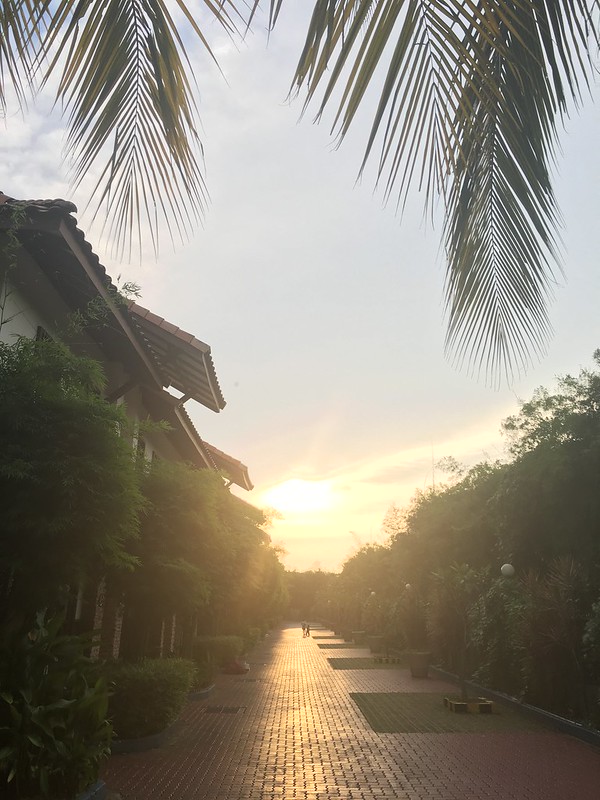 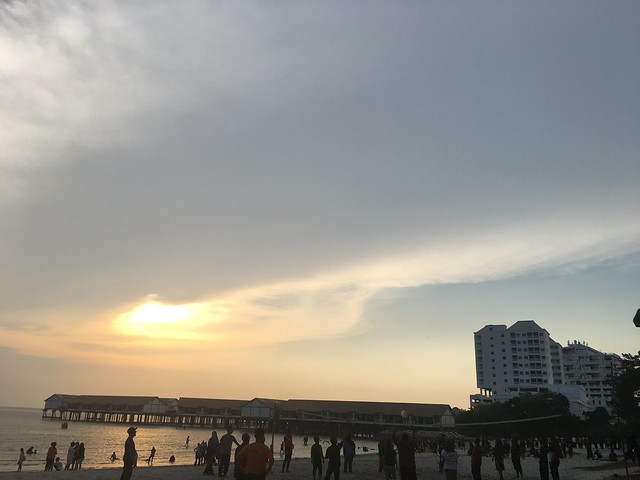 Next spot, I ran and infiltrated Lexis hotel’s beach, there were stunning pictures that I had taken, and the beach was thronged with people. 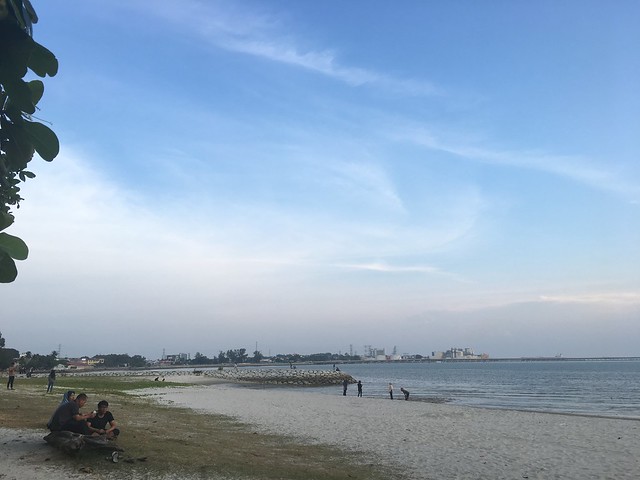 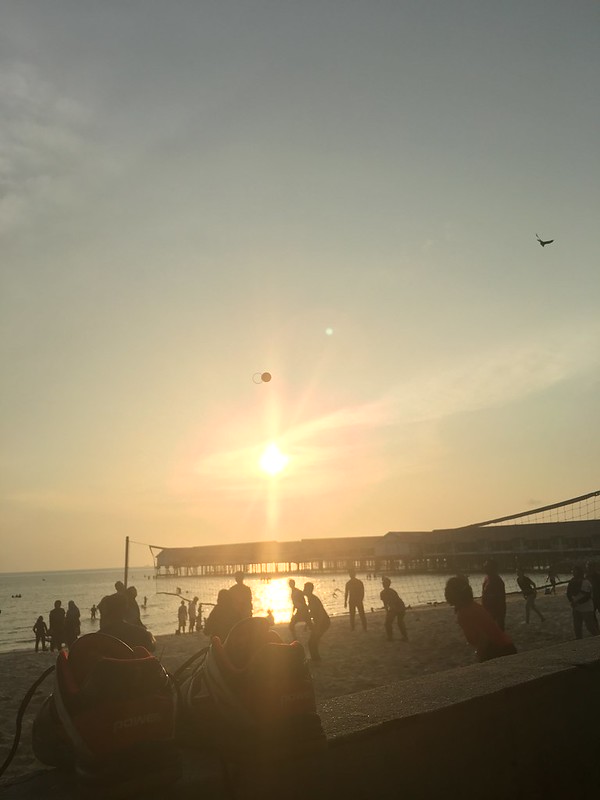 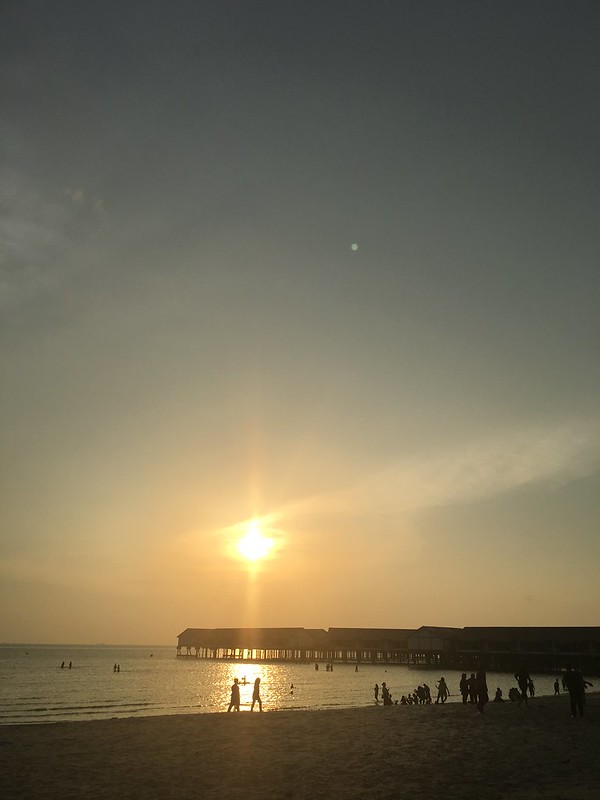 Consistently stopping to take these photos during my run, but it did not go to waste at all. I had to run back to the homestay as it was getting darker. 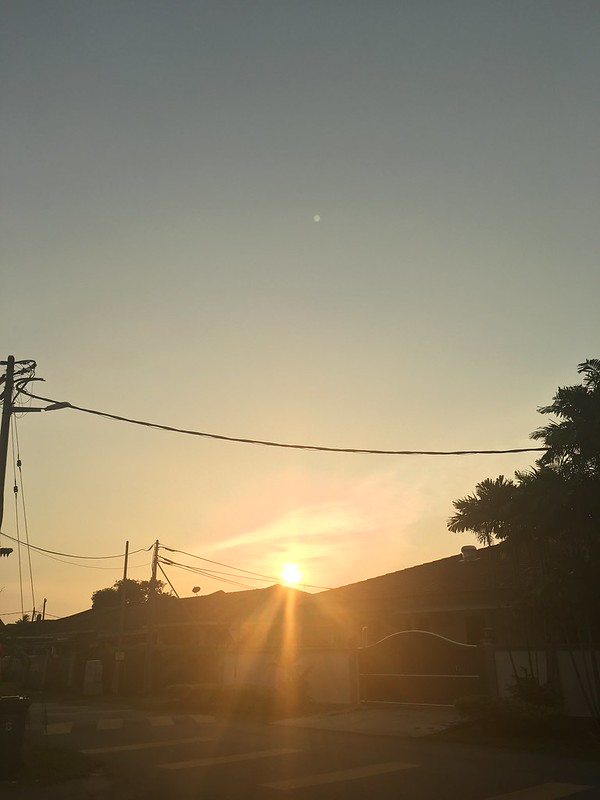 I had a great run with stacks of photos. My run was around an hour, my friends had started up the BBQ, I helped out Greeny in preparing the foods. There was a reason that I picked the driving job because I could avoid doing most of the menial stuffs like doing the dishes.

The night was still young, we had spaghetti, chili chicken, melted chocolate, roasted potatoes, grilled hot dogs, sizzling bacon and all of those BBQ foods. I ate for most of the times, helping out Greeny in the process. We had a good time, 10 of us, eating, joking around.

After the BBQ session, we had games with Ming. Although I had to confess, honestly, I just did not enjoy games anymore, probably I was just worn out from the drive and the run. So, before 1 a.m., I got to sleep.

The next morning, I helped out Greeny in making breakfast for the 10 of us. We had eggs and the bread. After breakfast, we headed to the Saujana beach to get some of the beach. (no pun intended).

We took a dip into the beach, the water was rather clean, not as dirty as I expected. 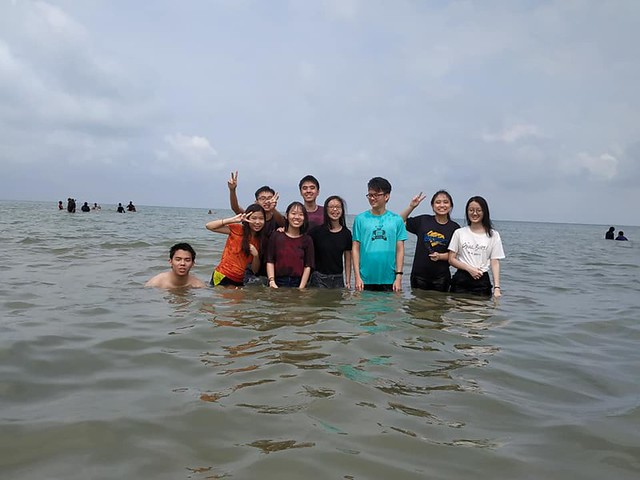 Greeny was holding the phone, so she could not join us, yet.

As planned, we proceeded with an inflatable boat ride across the beach. It was RM 25 per pax. I did not have any problem with the price, but when I was writing this post, I felt cheated because the ride only lasted for around 15 minutes just to feel the breeze of the beach, and that was the most part of the ride.

Nonetheless, it was the friends that I was with that matters, nothing really crossed my mind at that point.

The ride was, okay. Would I ride it once more, no.

Here is a picture that the boat-rider took for us. 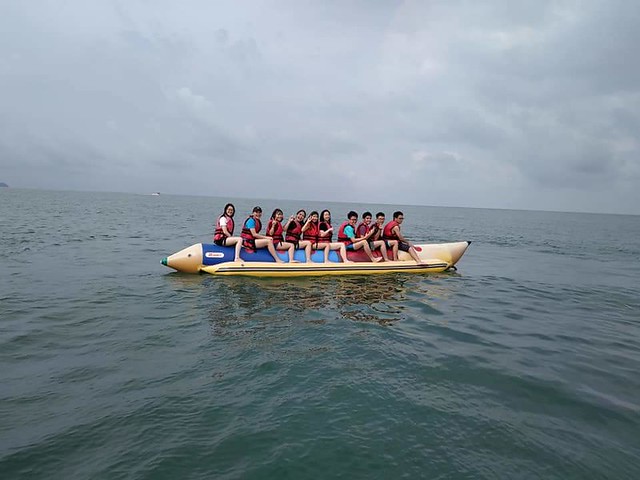 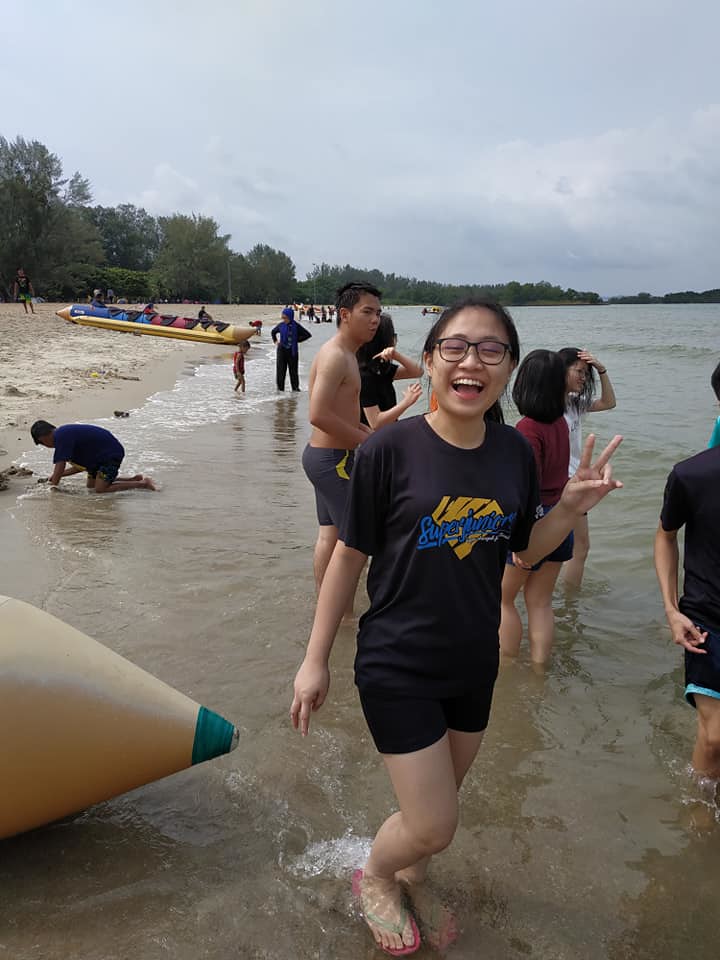 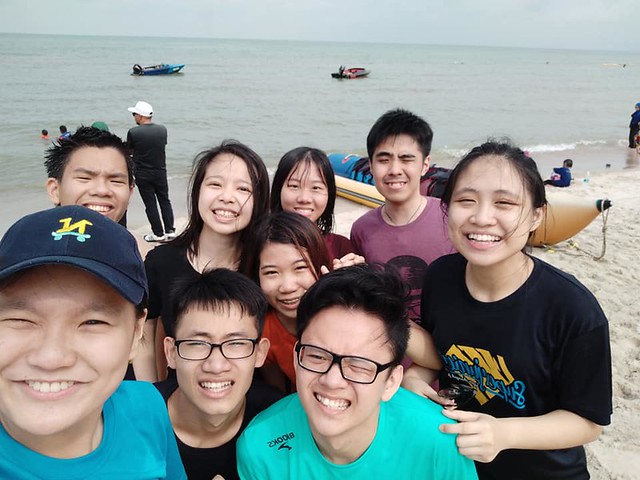 There was me on top of Greeny’s head. And after that we spent more time on the beach. I got buried in the sand for half an hour or so, definitely a repose for my tired mind. Some of us wanted to take the ride again, so off they go; another half of us headed to wash up.

Plus, we buried the slippers of those who went for the second ride. Haha.

Here comes the part which I most disliked about the trip: the condition of the public toilet. It is a disgrace, an utter disgrace. The toilet was filthy and we had to pay RM 1 per pax just to rinse off the sand. There was no proper pipes or hoses that let us wash up, just a bucket filled with water (who knows whether clean or not) and two hoses connecting to the washing basins. What a let down! Not to speak about the terrible condition about the toilet, the doors did not even have locks. Terrible!

Please do something about it, Ministry of Tourism. Sincerely by me.

I had to briefly wash myself up, leaving most of the sands attached to me, I drove some of us back to the homestay first in order to clean up.

The trip was about to come to an end. We drove to a restaurant suggested by Bacon, (unfortunately I forgot the name), the restaurant was situated at a secluded area- more like a mini-port. 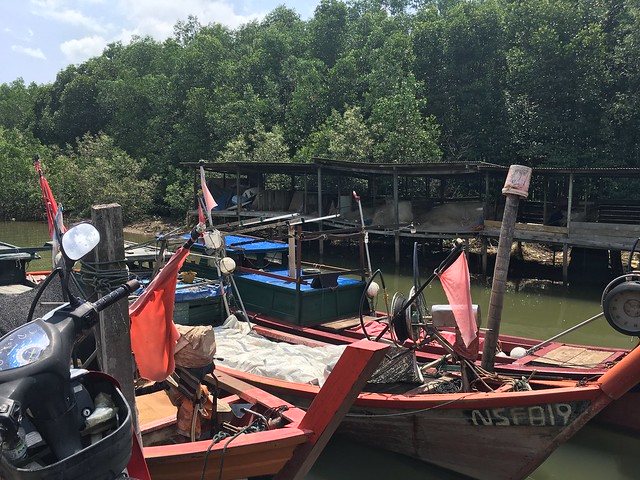 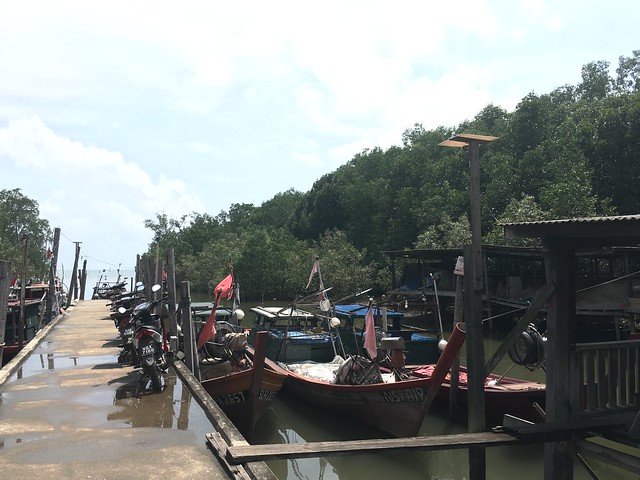 The food was fresh and cheap.

After lunch, we drove home. I had a great chat with Greeny in the approximately 2-hour drive back home, whilst the other passengers in the car dosed off throughout the journey back home.

It was a pleasant trip. Time well spent with my friends. Hopefully we can hang out again in the future.

Craving for more? Down below:
Gooey Situation
Doing Nothing.
Just Keep Doing.
Nanning, Guangxi, China (Day 1)
Forgotten, Yet Forgotten.
Be Grateful
Flushing All Out.