Ohaiyo! Good morning! Had McDs for breakfast and headed directly into Universal Studios Japan (USJ). The breakfast was nothing out of the ordinary, it was just McDs, what could possibly go wrong? The weather.

The skies started to become gloomy, drizzling a little, but people were still rushing to get into USJ even though an earthquake hit Osaka, Japan yesterday. 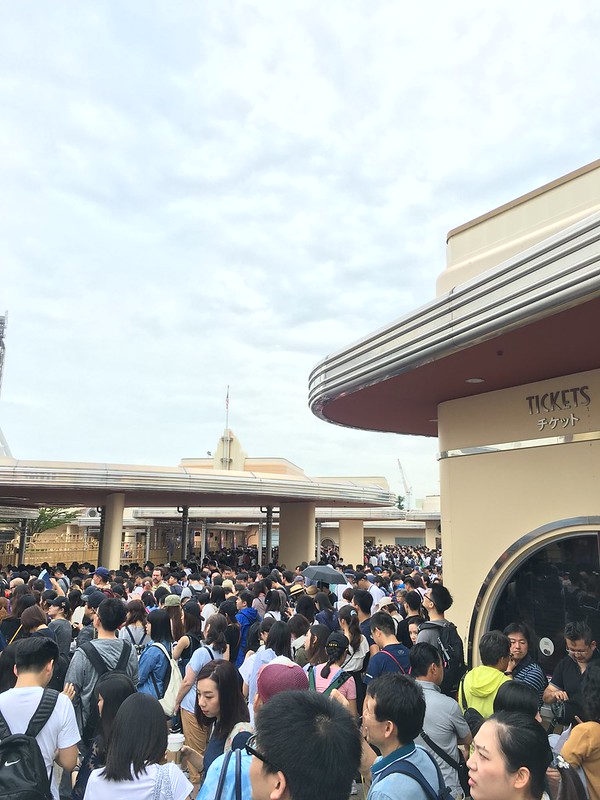 I was not outright keen about going to theme parks, it was rather meaningless going with my family, not to exaggerate. But, if I were given a choice, I would use that money to go to different food spots in Osaka and take pictures as I go, it would be a more efficient way to spend the money.

Babbling aside, let the wait and stare began!

We followed the throng running towards one of the main Harry Potter World attraction and went with the flow. 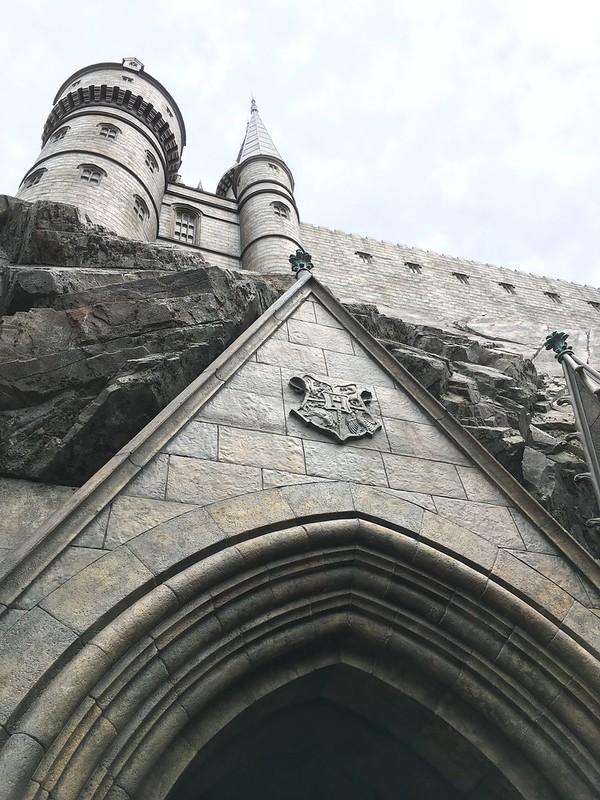 This truly brought me back to the days that I spent reading the iconic Harry Potter series, it was indeed magical, J.K. Rowling managed to make history through her words, making her one of my inspirations. Her words would remain as this enchanting story that we could pass down for generations. 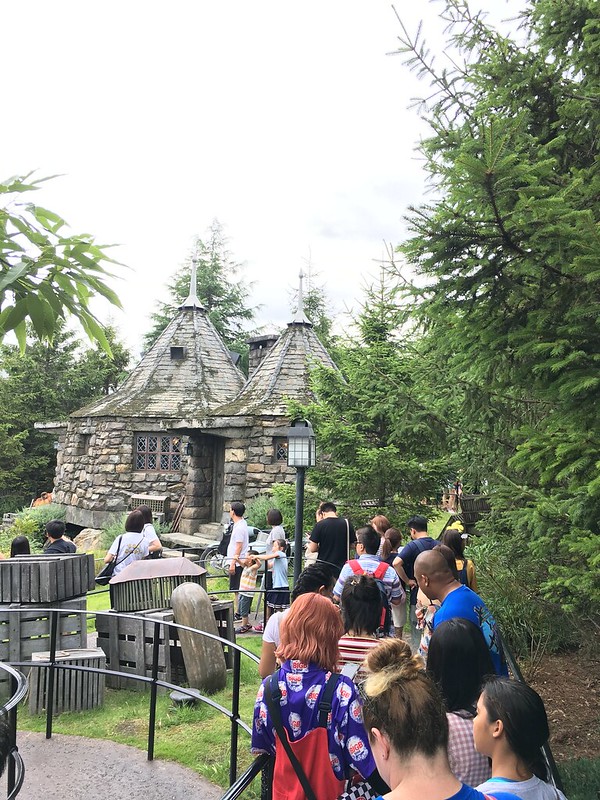 These were the thoughts when I was standing in the queue, the main part of theme parks are waiting, so I would sprinkle some of my thoughts here and there throughout this piece.

After rushing to the first two attractions, I realised that I had forgotten to look around.

I looked. And it was jaw-dropping. 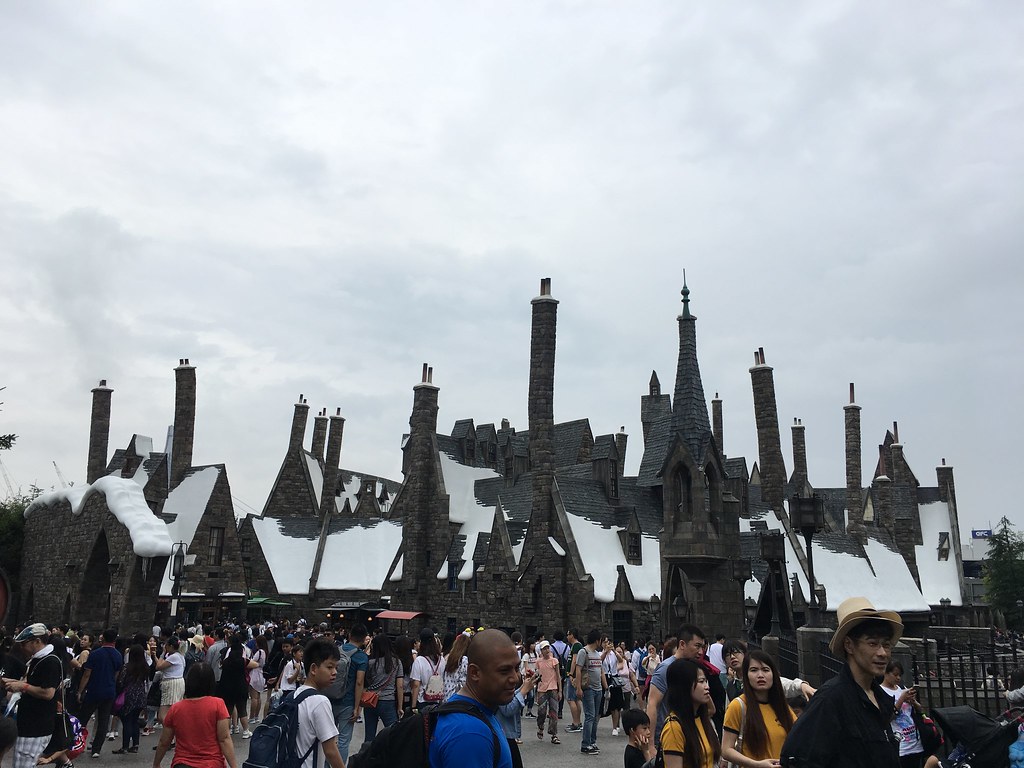 One of my wishes when I was reading the Harry Potter series was to get a taste of the butter beer. 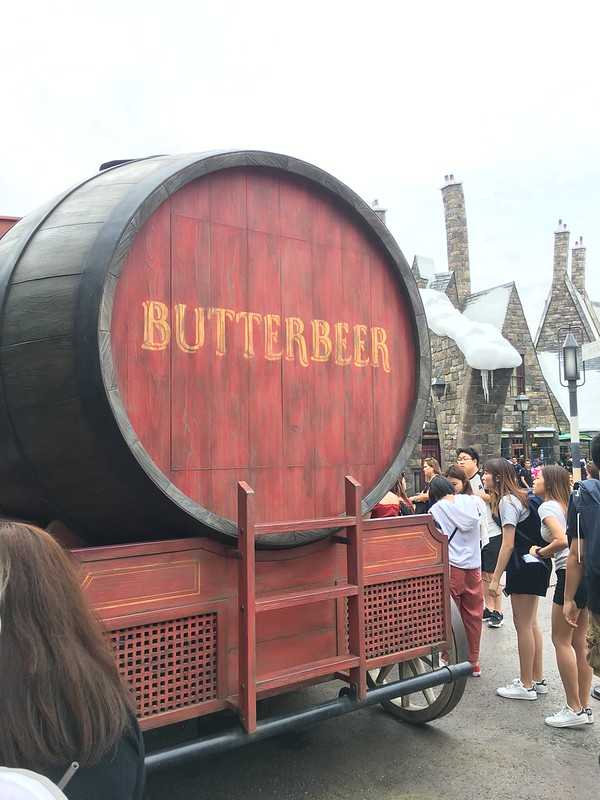 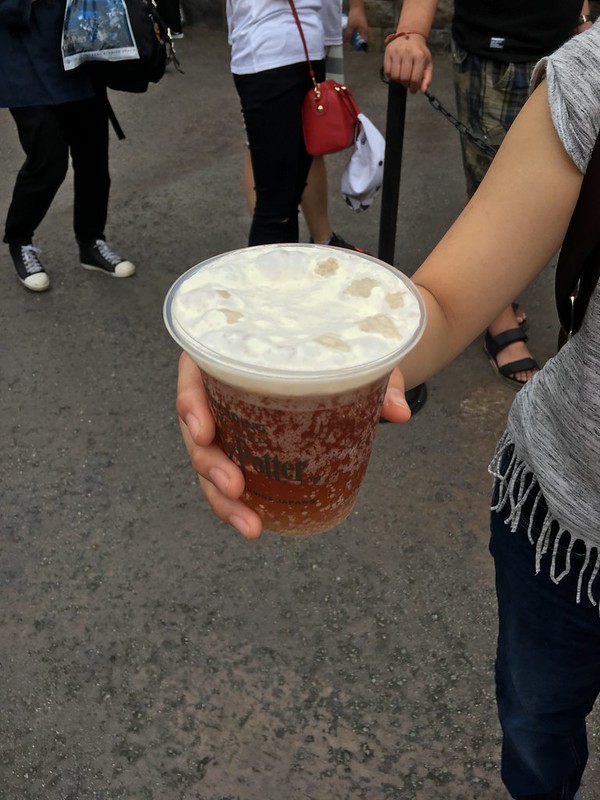 The bare truth aside, quite disappointed, I resumed my stroll around the magical wizardry world of Harry Potter. Many structures there were carefully designed to match what was described in the books, and they really did bring me back to those enchanting times. 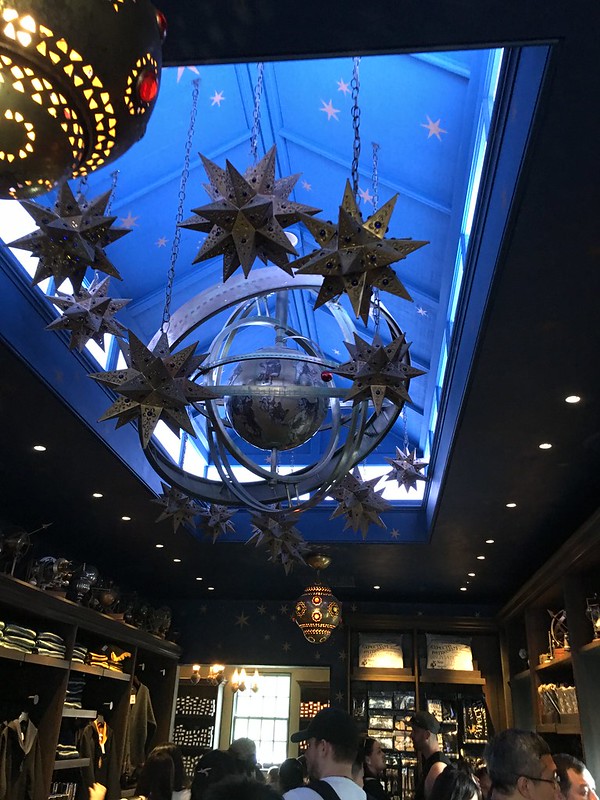 The mountain of books were threatening yet aesthetic. 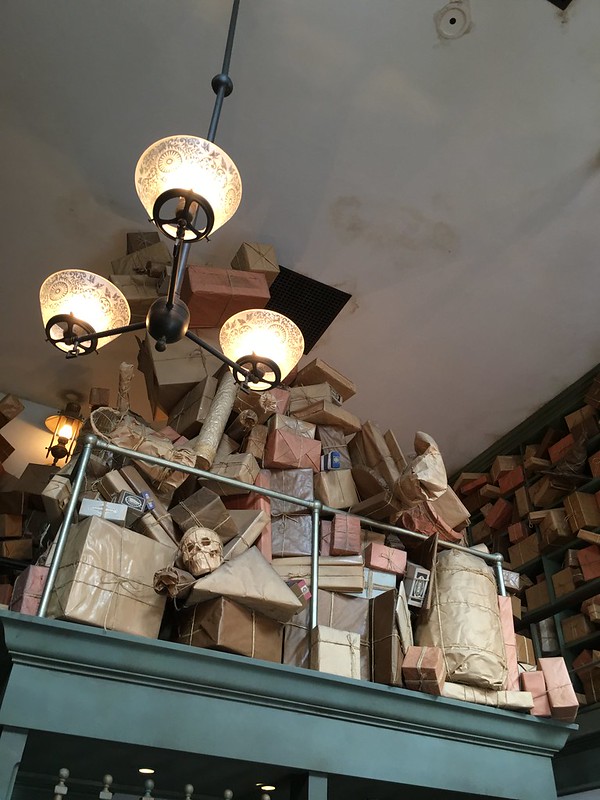 Classic monster book, a must have. 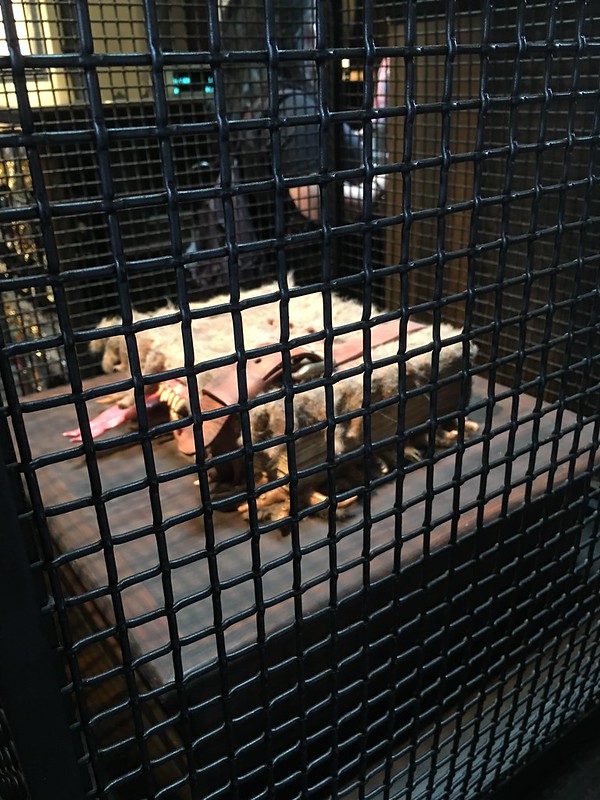 An accidental picture. Hopefully this lady would not mind. 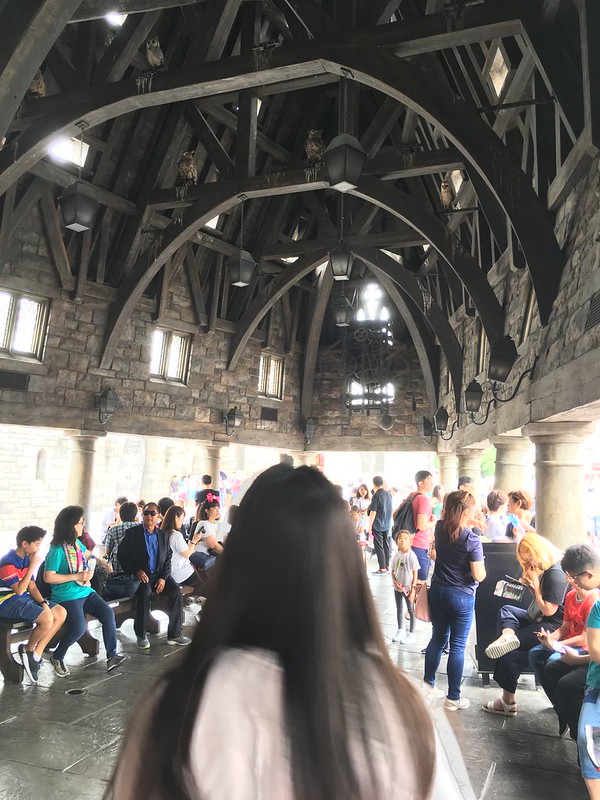 Hogwarts ahead! The rain did pour a little when I was visiting the shops one by one. I controlled myself not to buy any merchandises as I knew I would not be using them at all. 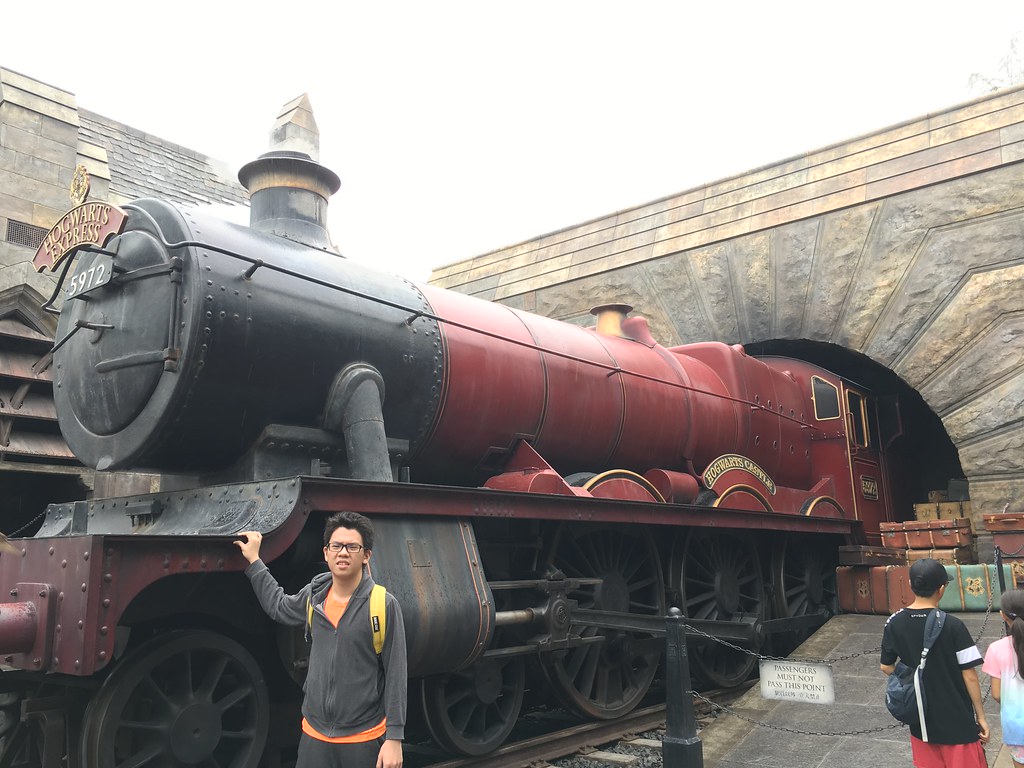 Another thing that I realised about USJ was that its architecture was eye-pleasing and specially designed for photo-shooting.

Here is the bewitched car knocking into me. 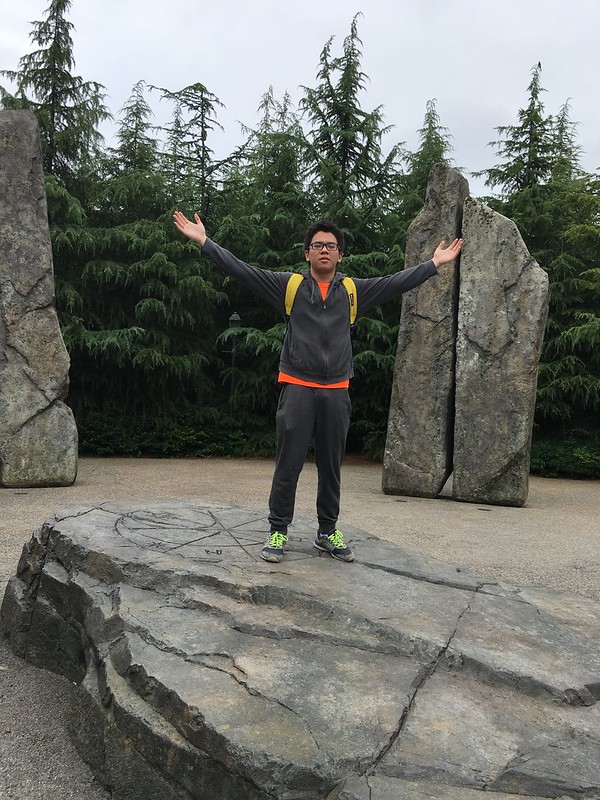 At this point in time, you would have realised that I was dead bored from the inside out, my inner self was finding things to do to satisfy the insatiable thirst inside me to make the most out of my time.

Luckily, I did spot some beautiful Hogwarts students sauntering around. But, I was too much of a coward to ask them for a picture together. That was sad. 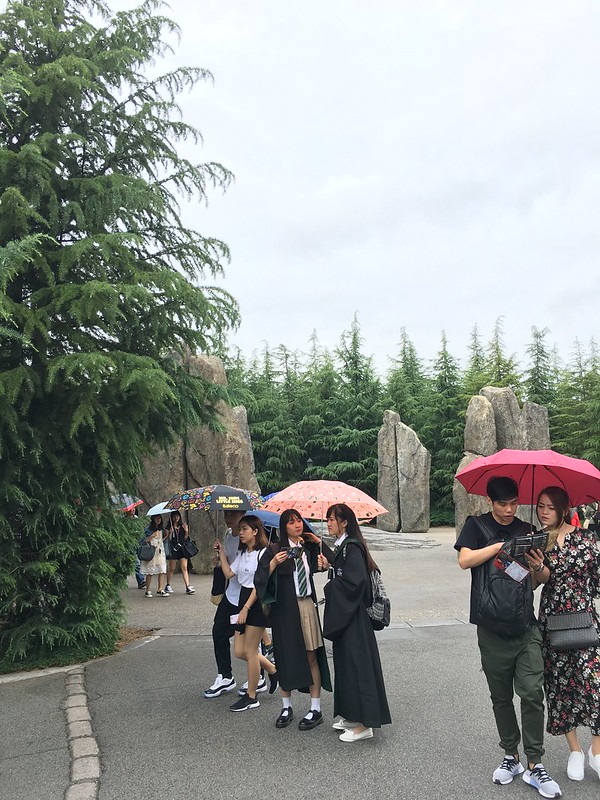 The rain did stop for a while, and started pouring again, and stopped. Due to the earthquake that happened yesterday, USJ announced that there would be no night shows for the day, they apologised to the USJ goers.

My brother was a little fuzzy throughout the visit to USJ because my dad kept dragging the whole group down by taking pictures here and there which made my brother extremely pissed off. He got on an anger feat after several times when we lost sight of our dad. My heart was not there to even feel anything because as I mentioned at the top of the piece, I am not a fan of going to theme parks.

Plus, the major roller coaster rides were closed down probably due to the earthquake that happened yesterday. This made my brother even pissed and made my day less interesting.

Here are some pictures that I took when I was walking down, tired and bored: 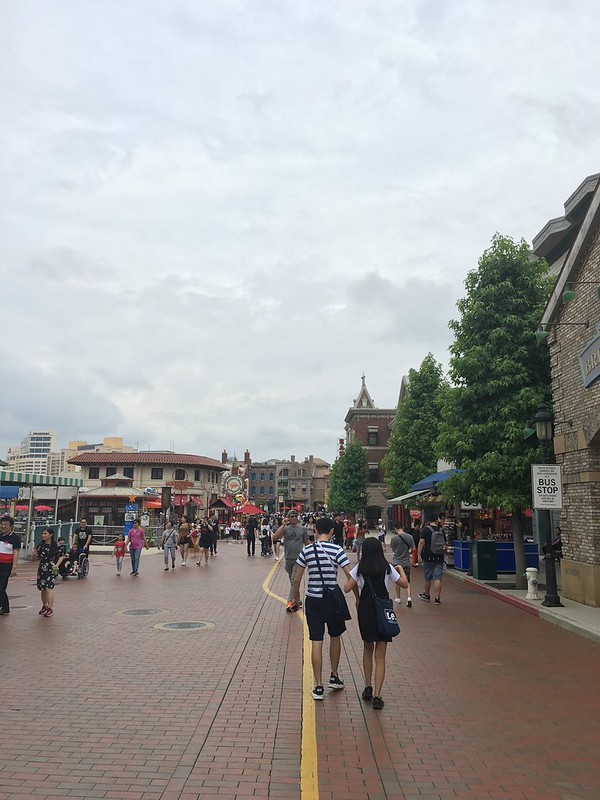 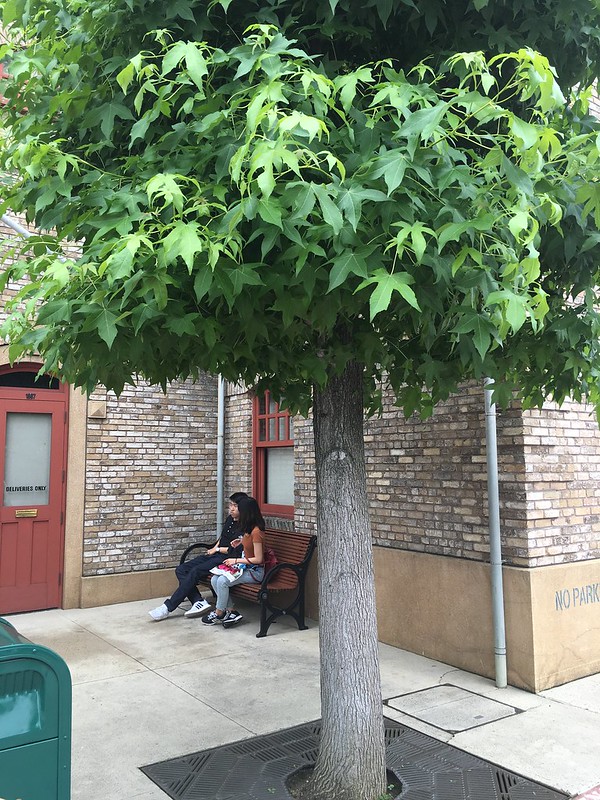 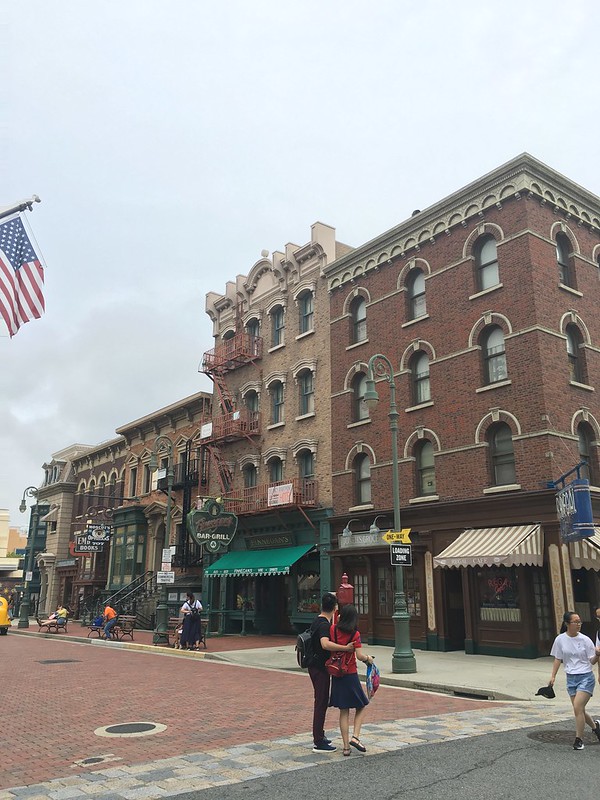 Okay, no more couples’ pictures. I just wanted to point out that there were many couples there. 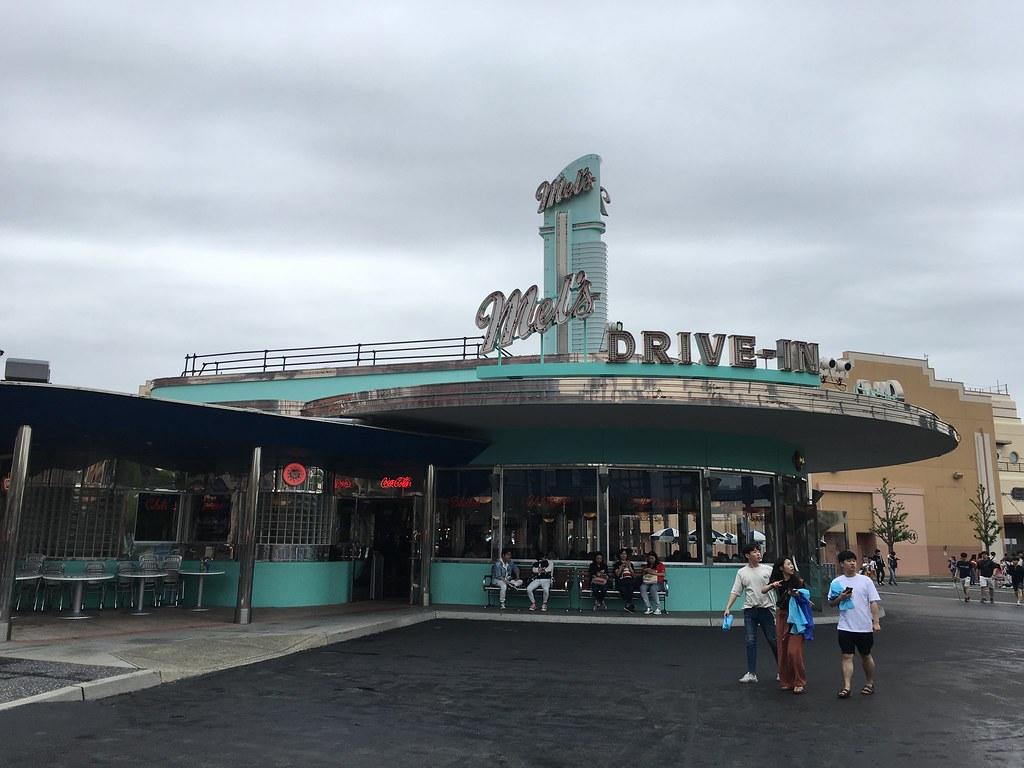 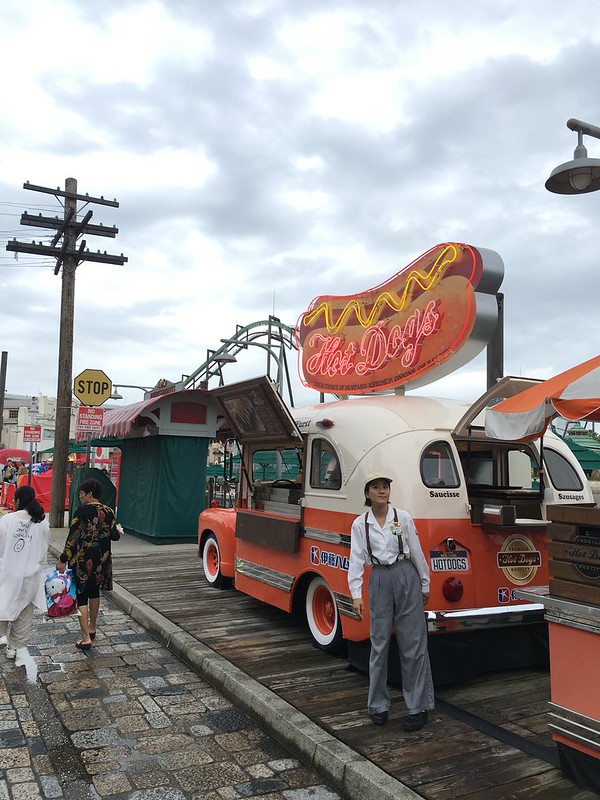 After passing by some rustic food stores, we decided to play some festival games. As for the ‘kiasu’ man that I am, I was on try-hard mode when I was given the chance to play those games. Luck was not on my side nor on my siblings side. We walked away empty handed which was why I did not have pictures for that.

We had our very-late lunch at one of their western restaurants. The food there was fresh, manufactured, and nice. We had spaghetti and pizza. Once again, no photos because it was not that great of a picture and I was hungry at that time, the thought of taking pictures did not cross my mind.

Stomach filled, my parents were worn out, my brother was still energetic, I also felt the lethargic, same went for my sister. Therefore, my parents let loose my brother to roam around the theme park whereas I pulled my sister to take pictures for me. She is not a great photographer, but these were the best that she could do: 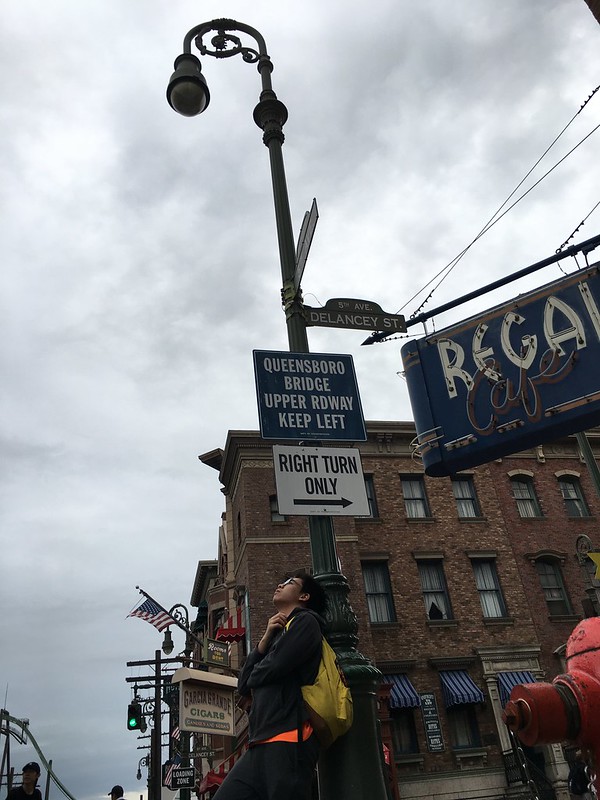 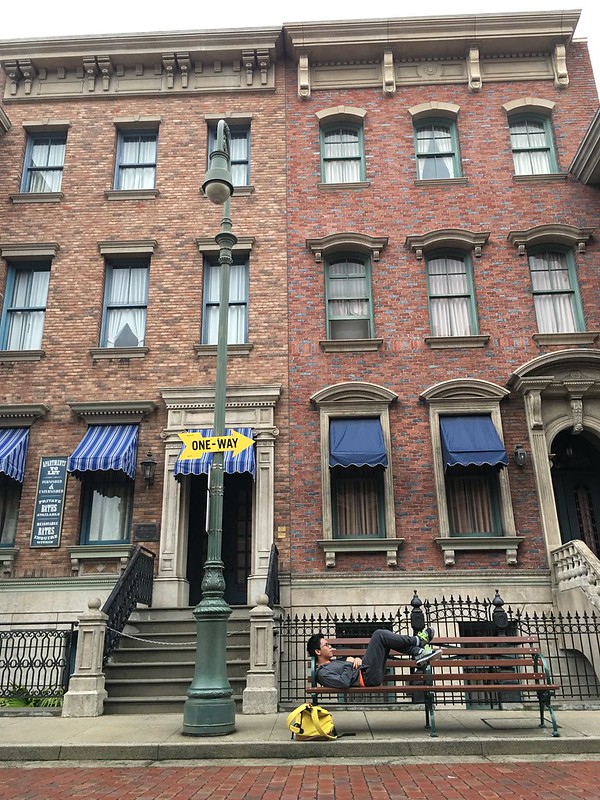 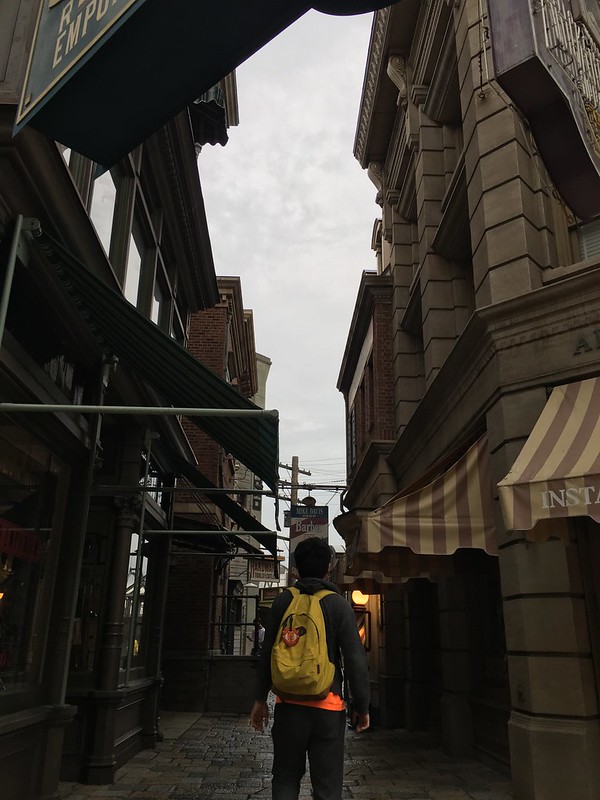 An hour passed by as we took the pictures. We were tired and hoping to be back to the hotel as soon as possible.

Here is a dedicated USJ employee carrying out her duties to cap of the trip to USJ. 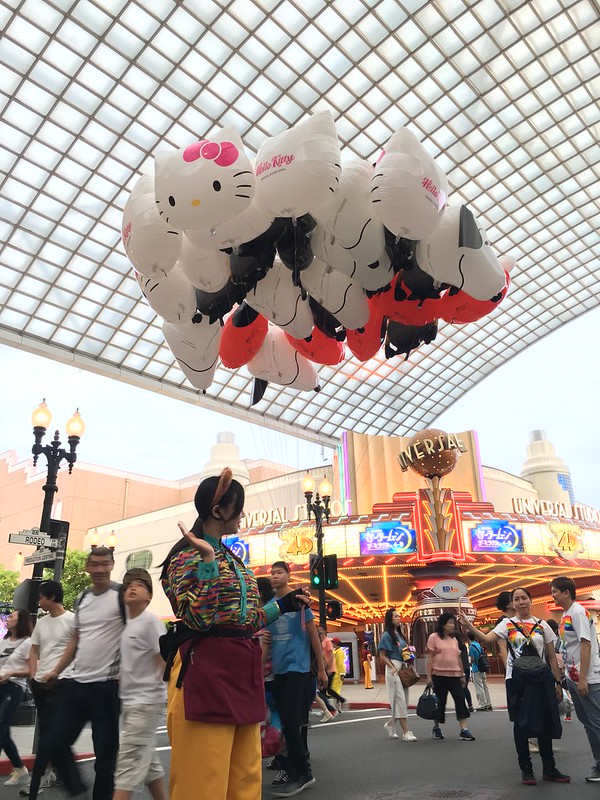 As we were walking out, we saw Woody Woodpecker. My dad wanted to go look see look see at the merchandise store, we could not stop him although we really wanted to head back to the hotel.

And here are some photos: 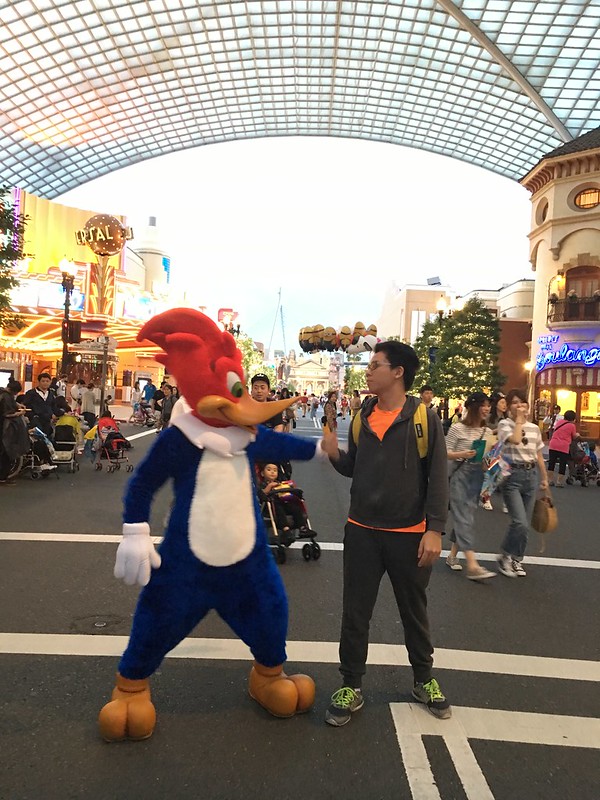 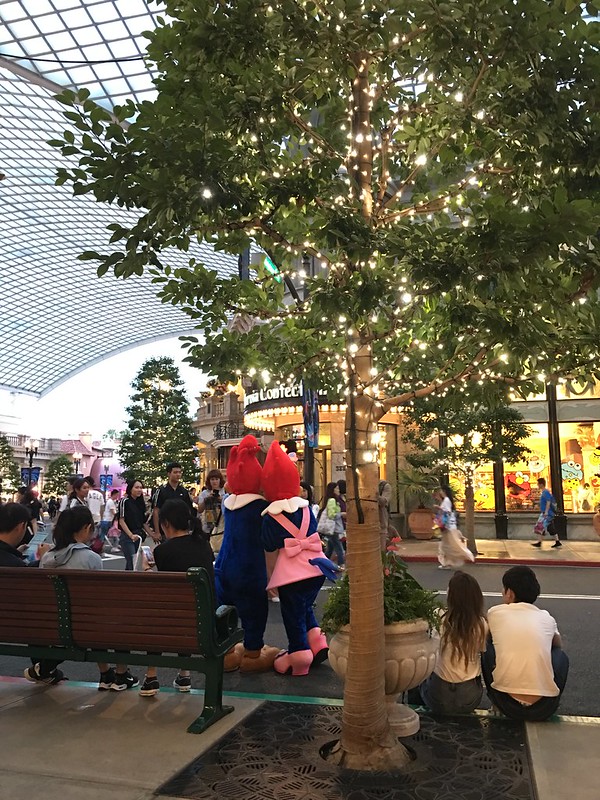 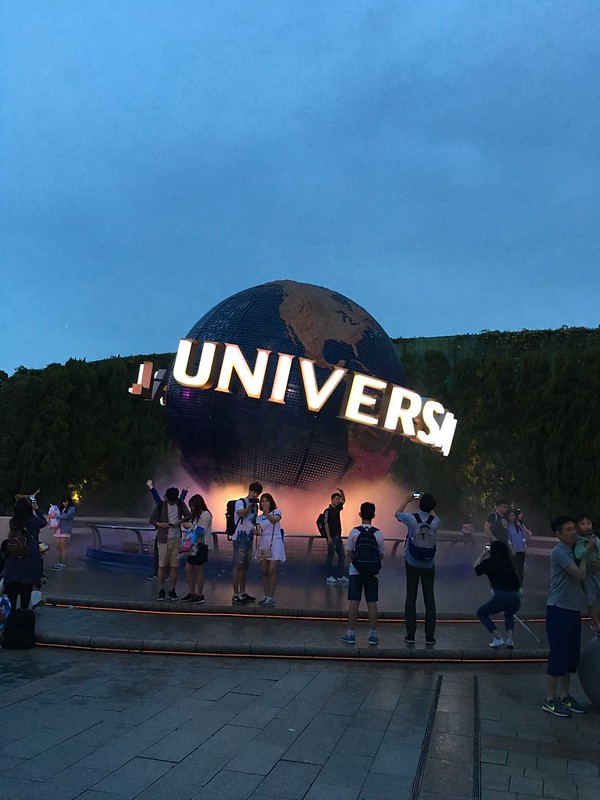 Going on holidays with me would seem restless as the day had not ended yet. We went to a Shonen Jump store outside of USJ to look see look see.

A heaven made for otakus (although I would admit the types of things that were sold here were limited): 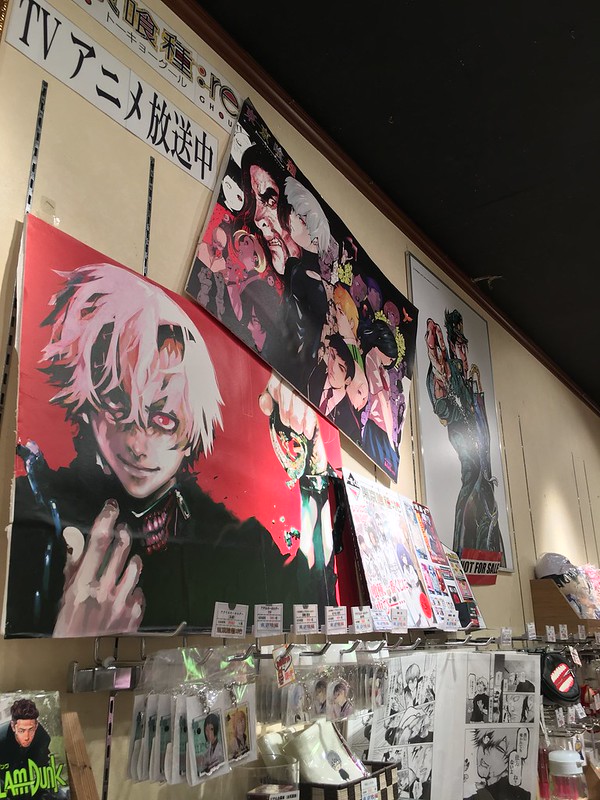 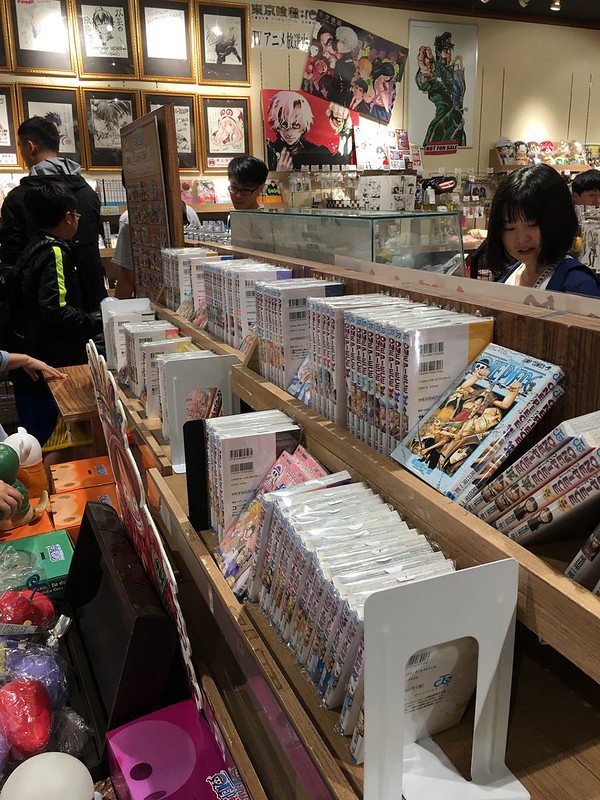 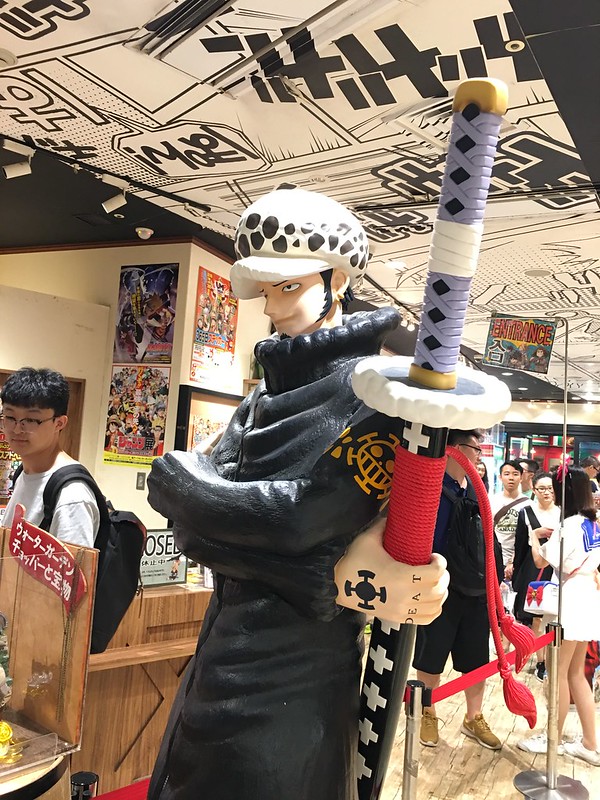 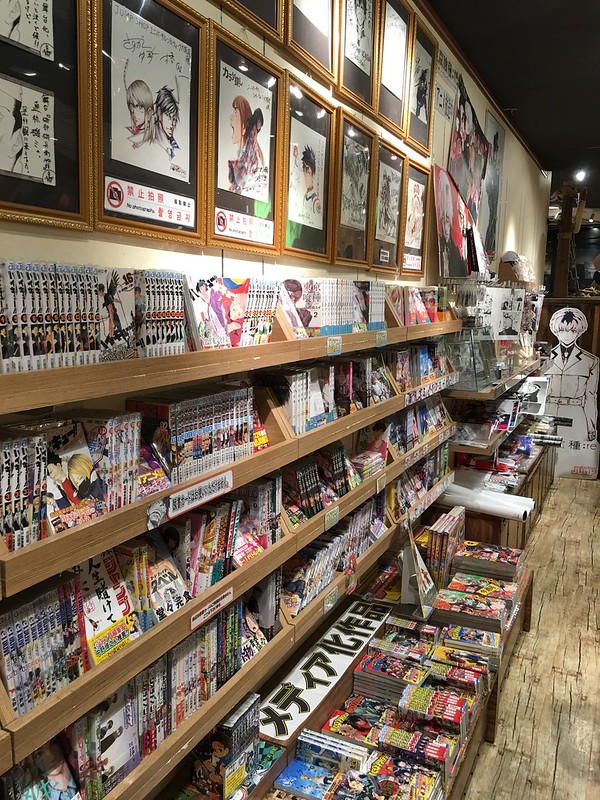 That’s all for the day! Catch me up in the next post!